SJOliver
You are here: / Music / Features /
A look at five of the most unusual, striking or surreal album covers for progressive rock bands in the 1970s and how they reflect the existentialism of the genre.
Dec 17, 2014 roob.la/38627

Concept album covers for progressive rock bands in the late ’60s and ’70s are, in my opinion, the most imaginative and surreal. They are, like poems and snapshots, small glimpses into a very strange yet startlingly human reverie. For some reason, I always think of them as being infinitely braver than other albums in the 20th Century because they are perhaps the first attempts at existentialism in album covers. A line from Philip Larkin’s poem Aubade (1977) springs to mind: ‘The sure extinction that we travel to/and shall be lost in always.’ Brooding and metaphysical. In a way we can lose ourselves in these kinds of artistic expressions because they are unflinching, sometimes unpalatable, but they mesmerize. They comprise the perfect antidote to covers with members of the band or stand-alone singers, photo shopped and preening for the camera. These five album covers are self-assured in a different manner: 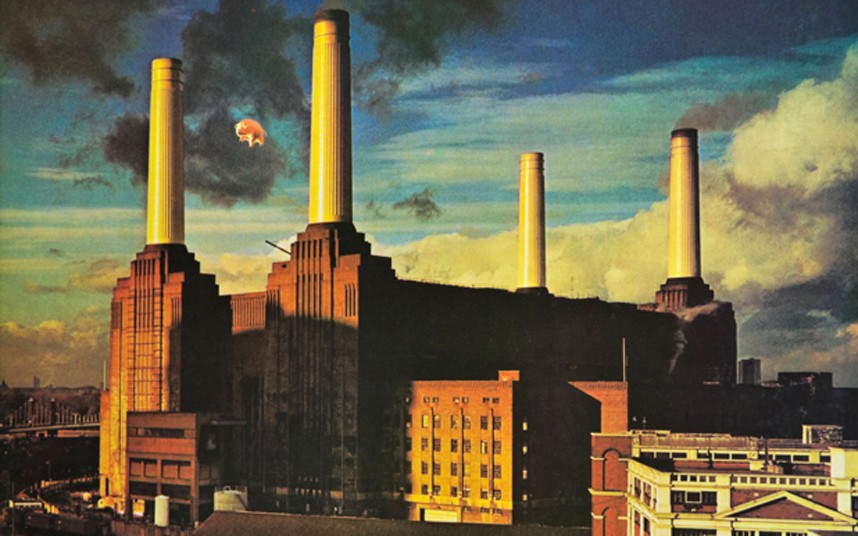 So famous I need not discuss the origin in great depth. I think its power lies in being all shades of desolate: it suits both David Gilmour’s forlorn and Roger Waters’ slightly more sardonic voices on the album. Battersea Power Station is described by Waters in an interview as being a ‘beautiful’ but ‘gloomy’ building; ‘the idea of power is very appealing in a strange way.’ (1977, Stories Capitol Radio Interviews) Though he describes the flying pig between the towers as ‘a symbol of hope’, I always reacted to it as though it was a puffed up symbol of the self-aggrandizing capitalist ‘pigs’ in George Orwell’s 1984 – flatulent with greed yet empty inside like a great balloon. On a humorous note, the band actually asked their manager to hire a sniper to take the pig down on the shoot though the manager didn’t require one on the second day. As a result, the pig abandoned its station and managed to alarm passengers in the flight path of London Heathrow Airport before landing in Kent. 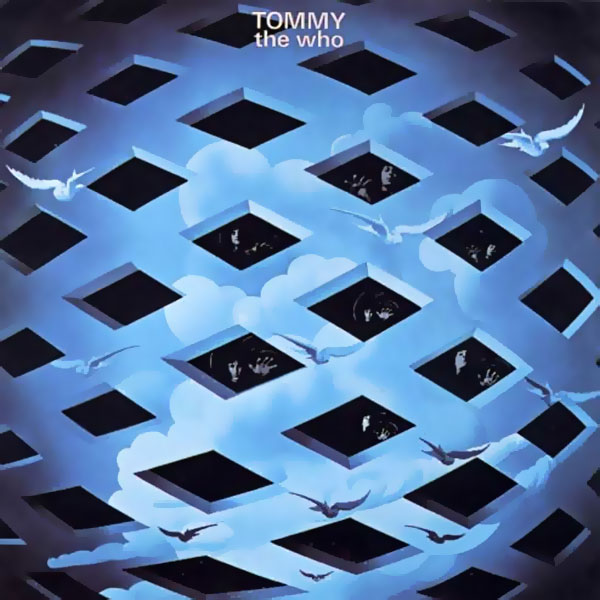 ‘It was 1968 and[…]everyone was promoting some kind of message – feminism, expanded consciousness, meditation, revolution, God, drugs, love, the environment. Rock was doing its usual up-to-the-minute job of transmitting them – if rock could do it, I thought, so should illustration.’ These are the words of Mike McInnerney who designed the cover art for Tommy. The album itself is the story of a deaf, dumb and blind boy whose relationship to the universe is physically cramped yet it begins to expand in a spiritual dimension once he connects with the teachings of Meher Baba (a self-professed God in human form). I love that there are these diamond-shaped holes of interference in the network – are they holes that represent a severed vision or a definitive one? It’s a great example of the intrusive as well as the dynamic quality of art in which it bends our perceptions without asking.

I have chosen this one because it screams (literally) for our attention. How can you ignore it? It’s the most weary and aggravated face – a striking combination of physical collapse and psychic chaos. I love that every orifice is like a world in itself. Barry Godber’s painting of The Schizoid Man is a wonderful evocation of panic and disarray and I think its best feature lies in being indeterminable as a solid thing. Like Edvard Munch’s paintings, the human subject’s terror lies in its inability to differentiate itself from nothingness; all the facial features are in danger of blending into the rest. Is the cover a mirror of the music? King Crimson’s ‘21st Century Schizoid Man’ is dark and cynical, certainly, but, with jarring saxophone and distorted pace all the way through, it lends a whimsical, schizophrenic humour to the doom and gloom. Also, beautiful tracks like ‘I Talk to the Wind’ ensure that our concept of the Schizoid Man is one not just of pain but also of tender abstraction and a kind of elegiac calm.

Atomic Rooster/Death Walks Behind You (1971) 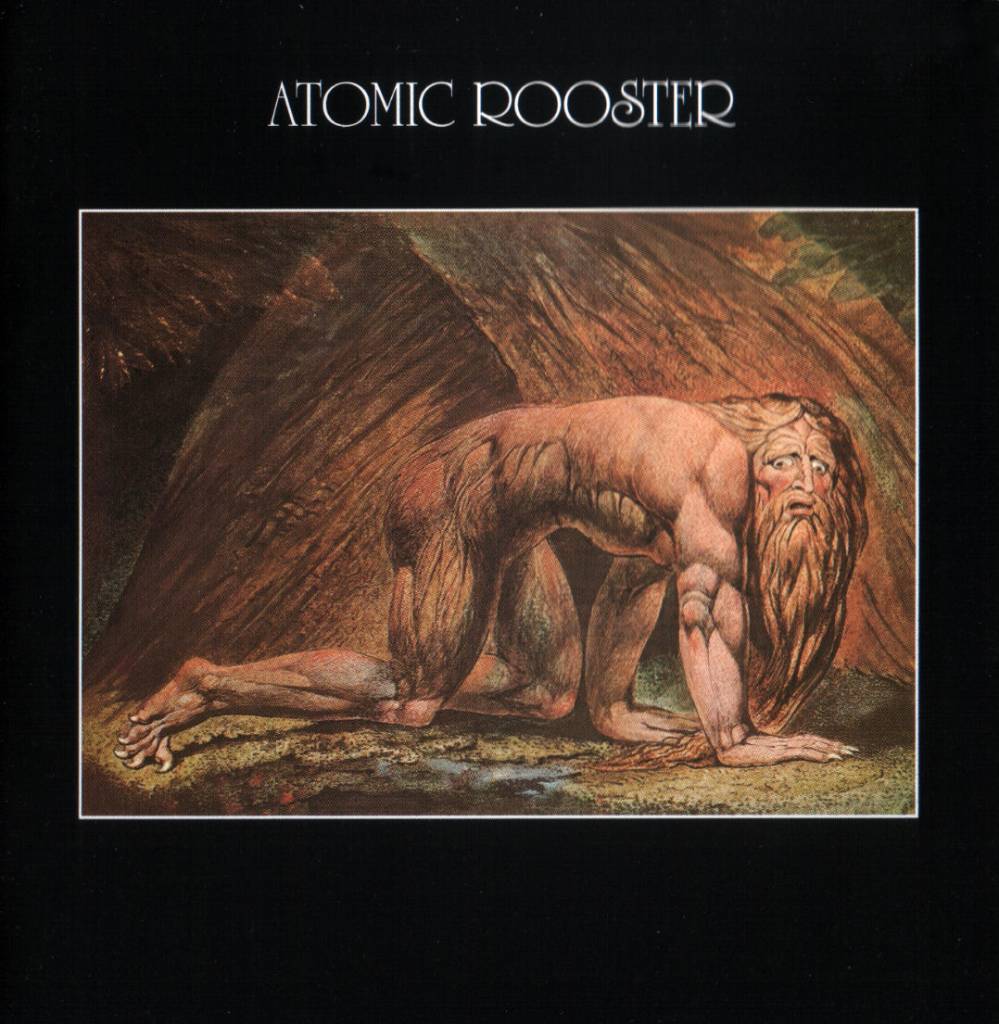 William Blake’s illustration of Nebuchadnezzar is strangely suited for a rock album cover. This is an Old Testament Babylonian King whose destructive megalomania reduced his brain to that of an animal. Following suit with other progressive rock albums which track the human condition to its very extremes, from nirvana and blissful self-transcendence to apathy and self-imprisonment, this cover relates to the latter. Those bulging eyes are self-accusing and they don’t know where to look beyond the self. Much like the Schizoid Man, this is the image of man whose narcissism, or the inability to conceive of anything as real beyond him, has reduced him to an abject wreck. ‘Nobody Else’ is perhaps the best song that pays tribute to such loneliness. 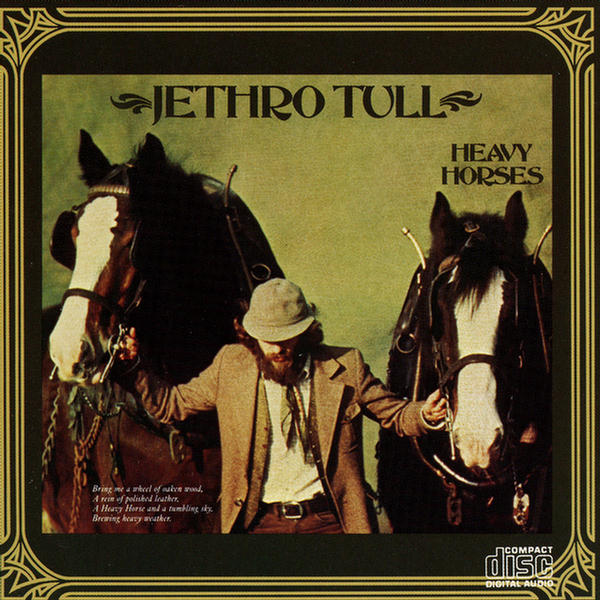 I’ve included this one not for its surrealism or because the art plays games with our perception, but because of its sharp, classical quality. It reminds me a lot of the album cover for Pink Floyd’s Atom Heart Mother with that vibrant photograph of a cow (the best image of a cow I’ve ever seen). There is a crisp realism that reflects the music well and is true to the stoic, earthy quality of Jethro Tull’s lyrics. And on a side note, how can we overlook that seventies’ hairstyle and sideburns of the man on the cover? For something that yearns for timelessness, it is quite touching that you can still place this photograph in the decade it was created!

Login to join the discussion

Up next in Music