God of War is a triumphant return to the series, but this isn’t the furious rampage we’ve known before. Unlike the stagnancy growing among other franchises in the genre, God of War has learned to evolve in these past five years, creating a more thoughtful, storytelling-based approach. But it doesn’t just craft one of the most heartfelt father-son stories in years, the game consistently delivers on almost every other area perfectly, while simultaneously holding onto the core of its predecessors and the fantastical nature of what made God of War successful in the first place.

God of War is seemingly absent of its puddle deep, annoying protagonist killing everything that breathes. Instead a roughed, mentally withered Kratos built of experience and stories. As the director, Cory Barlog, said himself, “Kratos was an angry lump of muscle, I made him a struggling father”. However, his roots haven’t been forgotten, and he desperately tries to protect his family from his past. More specifically, his new companion, son, and foil, Atreus. Unlike Kratos, his worldview is fresh of wonder and optimism. He’s extremely childlike in nature: acting rashly, interrogating Kratos with barrages of questions, and inappropriately expressing excitement over their dangerous adventure. They are both characters ripe for development, both teachers and students constantly learning from each other, and it’s a relationship beautiful in its dichotomy.

While there are dozens of cinematic, death-defying moments around every corner, it’s the natural, human moments that captured my heart so many times throughout the story. And every other character in between is equally fantastic, complex in personality and enduring their own character development, including a stellar and mysterious main antagonist. Each of their performances is also nailed perfectly. Kratos’s booming voice still sends shock waves through the air as Christopher Judge, increasing his characterisation of an impenetrable brick wall. Contrasted with Alastair Duncan, whose equally excellent performance is reminiscent of Aang from Avatar. Their adventure is similar to that of an ancient epic, delivering a memorable, goose chase of discovery in this wild new world of Norse mythology. Full of a variety of themes such as family, past, and prophecy. It’s paced perfectly, with beautiful moments hiding and waiting to either make your heart warm, race, or cry. Maybe even all at the same time. It does end mildly abruptly, but a full story and the fastest 25 hours I’ve ever played. And I could’ve played for hours more. 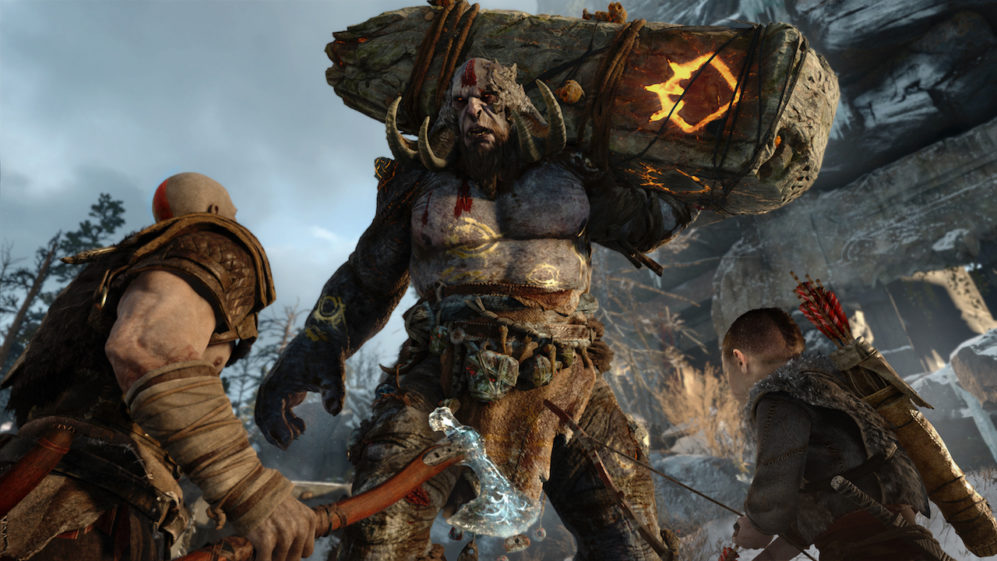 God of War’s adoption of Norse Mythology is executed splendidly, and one of the first that didn’t put me to sleep. The world is coated in lore, and whether it’s your sidekick telling what sounds like a recess playground story, the murals he’ll explain, or the runes he’ll pick up, it never failed to turn me into a fascinated student. It mostly stays optional, and it rewards your curiosity for diving off the beaten path and exploring the world. However, it does heavily play with the main story and leaves an incredible amount of depth on its characters. After the credits rolled, I even found myself digging through Wikipedia and researching how this relates to real life Norse Mythology. It took something typically covered in dust and made it the backdrop of a grand adventure.

This Norse themed mythos also sacrifices the bland, one-note corridors of Greece, replacing them with lush and almost photorealistic Norwegian landscapes. Everything is doused in a generosity of color, creating mouthwatering shots in one of the most beautiful games I’ve ever laid eyes upon. However, God of War isn’t just the frost covered winter it appears to be, and the narrative takes Kratos and Atreus across a diverse myriad of imaginative areas rewarding your eyes for exploration. This remains true to the creatures across the world, varied across their environments with gruesome and unique designs. However, the unnecessary reliance on certain types was a bit apparent.

God of War also has an impressive orchestrated soundtrack, full with a nordic choir and Symphony. It’s extensive, over an hour long of tracks ranging from haunting to serene and peaceful. They blend with the mood beautifully, swelling at all the right times, and using familiar melodies during the most precious of moments. Its world is also impressive from a technical perspective, absent of any loading screens and adopting an omnipresent camera from the beginning. You witness the entirety of Kratos’s journey from beginning to end, and its intimate position over his shoulder brings you into the focus of the action at all times. 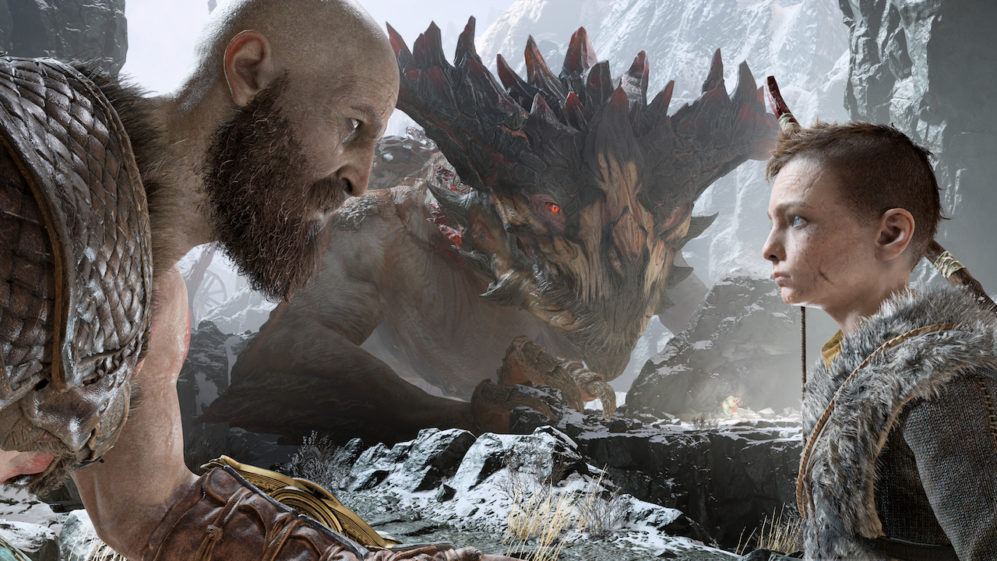 The action, of which is surprisingly deep, and is the final straw bringing God of War to an entirely new pantheon of perfection. This time, an axe has become Kratos’s main instrument of destruction, and the series gameplay will never be the same. It’s more akin to Dark Souls rather than Devil May Cry, punishing the player’s lack of attention and focus. The series still holds true to the basic light attack/heavy attack formula, but the flashy, hit-counter building arcade approach is generally nowhere to be found. Kratos ops for a more strategic style of combat reflecting his new age and character design. Paving the way for its own series of brutal, gory, takedowns the franchise is known for. The heaviness of the axe results in slower, but powerful attacks, and of course, Kratos’s ability to throw the axe feels incredibly gratifying, lodging itself within enemies until summoned back by the press of a button.

God of War makes use of Kratos’s physique, lending the option for less powerful, but satisfying hand to hand melee combat along with his guardian shield. Weaving together all three creates some of the finest moments in any action game. I would commonly find myself throwing the axe into the skull of a now-frozen enemy, kicking it into a wall only for it to stand up into a charged downward axe swing. These combos are difficult to pull off and require practice, but it feels all the more rewarding. This is also attributed to the clever use of sound and vibration design. The axe clunking back into your hand and the contact of Kratos’s shield blasting an enemy away give these weapons weight and depth.

God of War rewards you for your efforts and allows you to exchange experience points for new moves and combos, spicing up and giving more flavour to already colourful gameplay. These unlockables are available for all of the games combat styles, so while I mowed through the axes page relatively quickly, I could simply begin the shields. This gave me time to master the axe long before the ending of the game, and really experiment with its room for creative freedom. Certain upgrades to your abilities will allow backtracking, and with the addition of smart puzzles, God of War begins to share qualities with that of a Metroidvania. 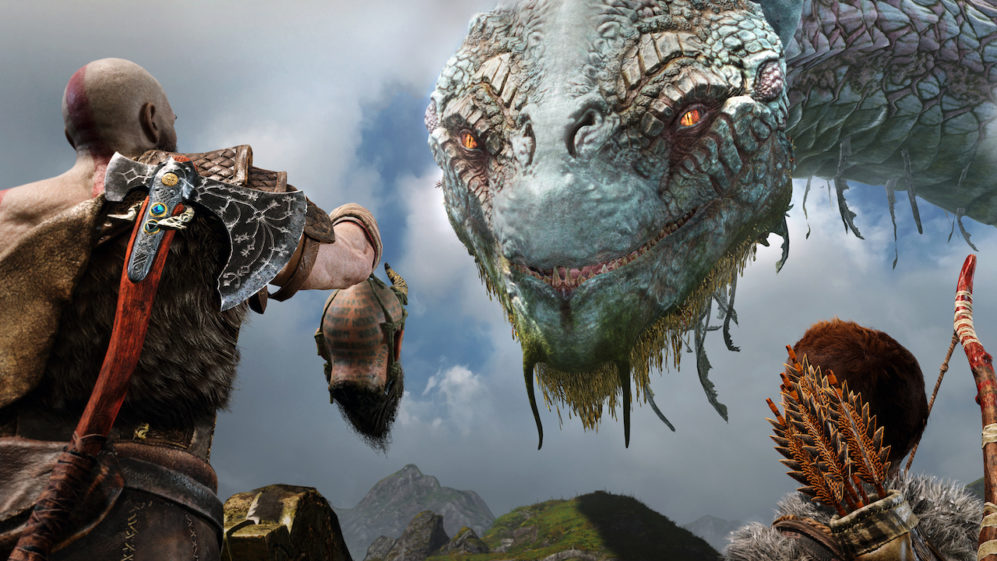 The enemies you’ll fight are diverse in motion, with individual patterns and movements demanding focus. These fights are incredibly fun, and the boss battles elevate everything to a new level. Requiring everything you’ve learned in intense and fast tests of ability. Many of them do end up being reskinned trolls, but the ones that stick out are packed with special moments I’ll remember for years to come.

Unlike clunky AI who tend to get in the way, Atreus is a fluid addition to the combat. He may take out one or two monsters within a large horde, but he’s essentially another useful weapon at your disposal in combat. Aiming the camera and pressing square will fire an arrow stunning an enemy. Then throughout the journey, he’ll begin to acquire arrows with a variety of elemental effects. And similar to other weapons, the effects those arrows will have can be upgraded to immense power levels.

However, the systems may arguably go too far in God of War, apparent in the armour Kratos and Atreus wear. Armour can be crafted with materials found around the world by a pair of dwarfs waiting around every corner. Then, each armour has individual stat effects such as strength or defence and can be further upgraded with the same materials. However, it doesn’t end there. Armour stats can be further raised with enchantment stones, with armour having up to three enchantment slots. Personally, it all was a bit confusing. However, it hardly hindered my experience and can really just be ignored if desired. They’re there if you want the extra strategy, and that extra push may help in later battles, rivalling even Dark Souls or Nioh in difficulty.

Sony Santa Monica has just placed themselves within the upper echelons of Sony First Party. God of War soars to a typically unobtainable state of perfection, knocking almost every category out of the park with essentially the first try at bat. Kratos is now a respected frontrunner of PlayStation mascots, rightfully deserving a spot next to Crash, Nathan Drake, Aloy, and more. Whether it’s the memorable characters, an adventure of epic proportions, heart pumping gameplay or the outstanding visual design and world, God of War is a masterpiece.