Tom Batt
You are here: / Gaming / Reviews /
3/5
An enjoyable game with a wide array of features that does everything it offers well, but never really tries anything new to help it excel or stand out.
Jun 06, 2017 roob.la/59634

Those familiar with Gaijin Entertainment’s War Thunder will feel right at home when they first load up Crossout, an almost spiritual successor to the Russian publishers hugely popular WWII MMO. Developed by Targem Games, there are some very notable gameplay differences right from the offset, most obviously the crafting ability, allowing players to construct their own ‘Death on wheels’ using a vast catalogue of elements from armour to weaponry. This is Crossout’s strongest feature giving gamers a lot of freedom in placing items, yet keeping it simple and intuitive.

For this review I was provided with the ‘Armoured Turtle Founder’s Pack’ giving me a pretty durable and powerful vehicle to start with, but my inner designer was itching to see the possibilities of what I could potentially create. A quick button press and your current vehicle can be pulled apart like Lego and all pieces placed in your storage. Other elements can also be purchased using in game credits or you can trade items, earned from battles, with other players.

Building from scratch however is not just about the appearance and firepower. Thought has to be put into where items are placed, the structure, as well as how much juice you have to power guns and the overall weight. Suffice to say you can spend hours tinkering away at every area to get the right balance. Once I was finished, I was very happy with the final result, but after taking it into a test battle it soon became clear my design was weak and changes needed to be made. No doubt you’ll find yourself going back and forth until you hit the nail on the head. Once you’ve finished you’re able to upload to the ‘Exhibition’ where you can share your designs with others and download blueprints of theirs. I was very impressed by the amount already on there and the creativity within is something to be admired.

As much as I enjoyed rekindling my obsessions with Lego constructing mad motors, there’s only so long you can spend building before you need to get into some battles. Three battle styles are available, PvP missions with various tasks such as capture the base, PvE raids pitting your team up against waves of AI enemies as you protect an area or PvP brawls, a free for all deathmatch. Through these you are able to collect special items to add to your vehicle and rank up. Battles take place in decent size maps ensuring you get into the action quickly and aren’t driving around aimlessly, but rounds only last for a couple of minutes or until one team has lost all members, which can be frustrating as they sometimes end just as things start to get exciting. Having said that, it does benefit those who get killed early on as you will not respawn until the next round, so you won’t find yourself twiddling your thumbs for too long. With vehicles being constructed using individual pieces, the destruction element is very satisfying as you see pieces ripped away from the vehicles of your enemies. You’ll regularly see people struggling to stay in the fight with only half a car left. 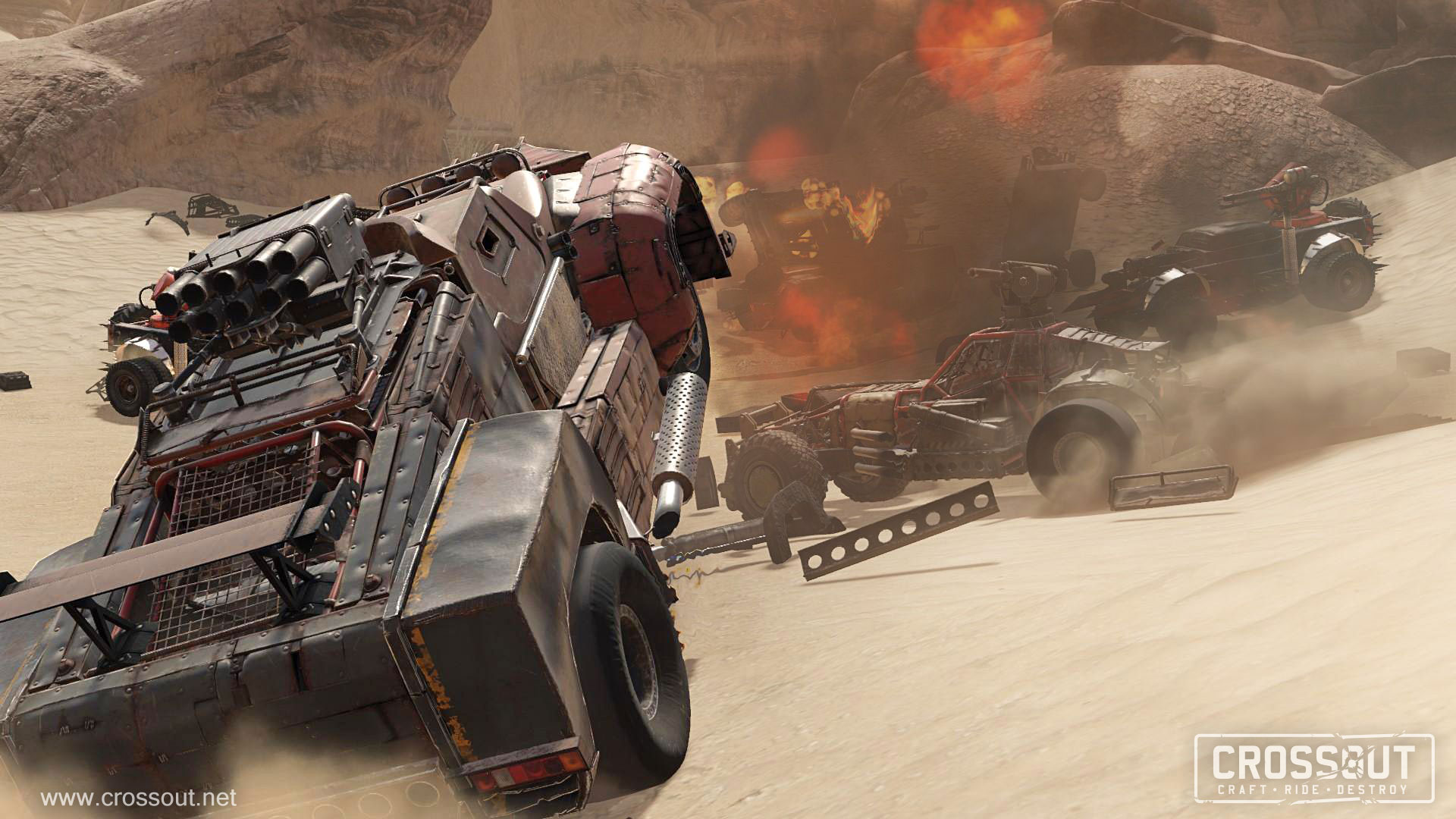 Although every player will start as an Engineer, upon reaching level 10, you are able to join one of three other factions, Lunatics, Nomads and Scavengers each with their own play styles, perks and manufacturing level-up system. Reaching level 25 as an Engineer opens up Steppenwolfs, the elite squad of Crossout. For my second faction at level 10 (you’ll remain as an Engineer) I opted for the Nomads with their balanced arsenal and mobility. Depending on which faction you choose will give access to different vehicle parts, crafting options and rewards. However, if you’re unhappy with your choice you will be able to switch every 24 hours allowing you to sample each of them before making an informed decision.

Controls are very similar to War Thunder, I was playing on the PS4 which uses the left analog stick to accelerate and steer with R2 and L2 for weapons. Whilst this works for tanks, at times it felt clumsy when driving vehicles with wheels and I would have liked the option to change the controls for a more traditional driving setup, but this ability is not included. A lot of the time I’d be driving forward and need to stop, my instinct would be to press L2, but that would fire a weapon costing me ammo.

Online is sturdy enough, with only slight lag every now and then – mainly when several cars are on screen zipping around and shooting at each other. Also upon initial loading of the maps, textures can take a while to fully render, but there was nothing major that could affect a comfortable few hours of play in one sitting. With the game still in its early days, server maintenance is a regular occurrence. After only 30 minutes of my first session with the game, the servers went down so be sure to find out when they are scheduled to avoid frustration. They will be detailed in the Crossout forum.

With gameplay similar to games like Twisted Metal and Vigilante 8 and a look and style clearly influenced by Mad Max and many other post-apocalyptic films and games, Crossout is an enjoyable game with a wide array of features that does everything it offers well, but never really tries anything new to help it excel or stand out. For a game that’s free-to-play it’s hard to complain, but it’s also hard to recommend spending too much time with it or too much money on its, in some cases, expensive add-on packs which only serve to unlevel the playing field.